The Mâconnais: the southernmost entry point to the Bourgogne region

The Mâconnais is a winegrowing region with a southern accent where rolling landscapes are alternated with monumental cliffs. In this wonderful environment, where the Chardonnay grape reigns supreme and where patches of Gamay can be found, you will taste some powerful white wines that are rich in aromas, not to mention some delectable reds. 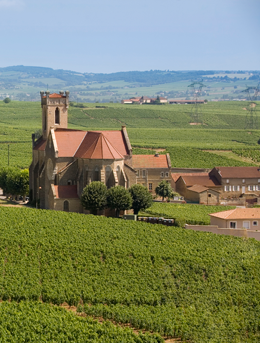 The most southerly terroir in Bourgogne, the Mâconnais covers a 10k-wide strip of vines 35km long, between Sennecey-le-Grand and Saint-Vérand. The region nestles between two valleys, the Grosne to the west and the Saône to the east. This is a winegrowing region with two faces. To the southwest of Tournus, the Monts du Mâconnais are a succession of wooded hilltops and little valleys, ideal for vine cultivation.

Further to the south, the hills give way to a grandiose landscape that is dominated by some monumental outcrops, including those of Vergisson and Solutré. The vines can be found on the slopes where soil and sunshine permit.

Here, perhaps more than in any of the Bourgogne region’s other winegrowing areas, the monks played a key role. The abbey of Cluny, founded in 909 by William I, Count of Mâcon, followed the Benedictine tradition with the principle of ora et labora (pray and labor), which drove the monks to create their own vineyards. It was, in part, in reaction to the wealth of Cluny that Robert de Moslesme founded the abbey of Cîteaux in 1098. Although the vines of Cluny were mainly located in the southern part of the current Bourgogne winegrowing region, the monks also owned vines planted further north, notably the celebrated vineyard of Romanée-St-Vivant.

The Chardonnay grape is omnipresent in the Mâconnais. This white varietal represents 80% of all vines planted in the region.

For the red wines, Pinot Noir is largely supplanted by Gamay, which was not eradicated in the Middle Ages by the Duke of Bourgogne since the Mâconnais did not belong to the Duchy.

Across the whole of the Mâconnais, you will have the pleasure of discovering the full range of appellations Régionale, including Bourgogne, Bourgogne Aligoté, Bourgogne Passe-Tout-Grains, Coteaux Bourguignons and Crémant de Bourgogne.
You will especially appreciate those appellations specific to the region. Certain appellations Village such as Pouilly and Saint-Véran are even applying to have their Climats classed as Premiers Crus.

The vineyard of Bourgogne – Mâconnais

seen from the sky

At the heart of the Mâcon terroir