Climats inspired by heritage and savoir-faire

Over the centuries, the men and women of the Bourgogne region have shaped their environment. They have constructed paths, clos and huts. They’ve cleared the land, planted vines, and marked out the Climats and lieux-dits. They have also developed their unique expertise that today makes up the heritage of Bourgogne, an age-old legacy that forms the roots of the Climats and lieux-dits.

For centuries, men and women have been shaping the Climats of Bourgogne. They have molded the landscape, worked the vines and forged the very character of the wines you enjoy today.

For more than 2000 years, the winegrowers of Bourgogne have maintained this regional heritage. 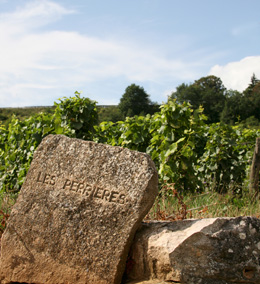 Generations of men and women have shaped the terroir of Bourgogne, leaving important traces in the landscape.

The word “Chazal” denotes a house, a farm and its outbuildings or a place to sleep on a key route. It is in the plural form and with various spelling variations that we encounter this word in the names of our wines, such as Aux Cheusots or Echézeaux, for example. It is not uncommon to discover Roman ruins in plots called “Les Chaseaux.” 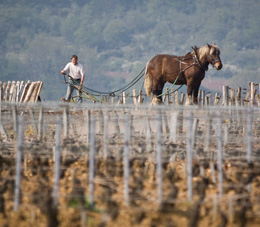 In Bourgogne, today’s winegrowers follow the paths trodden by those who went before them.

In the Middle Ages, the construction of many of the old roads was attributed to the Romans. For example, the lieu-dit of La Romanée in Chassagne-Montrachet is located alongside the Roman road from Autun to the Saône, via the south of Beaune.

Indeed, the word “rue” and its likely diminutive “riotte,” gave their name to many Climats and lieux-dits, such as La Riotte and En La Rue de Vergy in Morey-Saint-Denis, and the celebrated Climat of La Grande Rue in Vosne-Romanée. 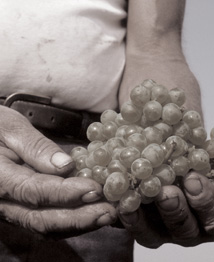 Vines arrived in the Bourgogne region with the Gauls and are not an indigenous species. Because they were planted and cultivated by human hand, the vines sometimes gave their names to certain Climats and lieux-dits.

Pinot Noir and Chardonnay, the varietals that contributed to the excellence of the wines of Bourgogne, have influenced certain names of lieux-dits such as Morillon or Noirien from Pinot Noir.

The Gamay grape, which was very popular until Phillip the Bold drove it out of the Bourgogne region, has also left its mark, such as in the lieu-dit of Les Gamaires in Chambolle-Musigny.

Other names refer to the cultivation of wines.

Young plantations are known as “plantes” and this name is found in a range of names of Climats and lieux-dits, including Chambolle-Musigny Premier Cru, Les Plantes, Marsannay, Les Plantelles, in the commune of Couchey, and Nuits-Saint-Georges, Plantes au Baron, in the commune of Premeaux-Prissey.